“Kiwi families were entertained and delighted by the phenomenon of the bear hunt. Through the simple act of putting a teddy bear in the window of their homes or other creative locations, New Zealanders were able to show support for their local communities, and have a bit of fun along the way, during a stressful time,” he says.

“We received hundreds of submissions around the country for the stamp issue. Every bear and photo has its own story, and we’re so happy to share these six stories with the country,” Mr Harris says.

From the sale of every stamp sheet, $3 will be donated to New Zealand Red Cross.

“The Bear Hunt stamp issue is such a wonderful initiative; something positive and creative that the whole community has been able to take part in, despite the challenging times we’ve all been facing.

The New Zealand Bear Hunt stamp issue is on sale now at stamps.nzpost.co.nz 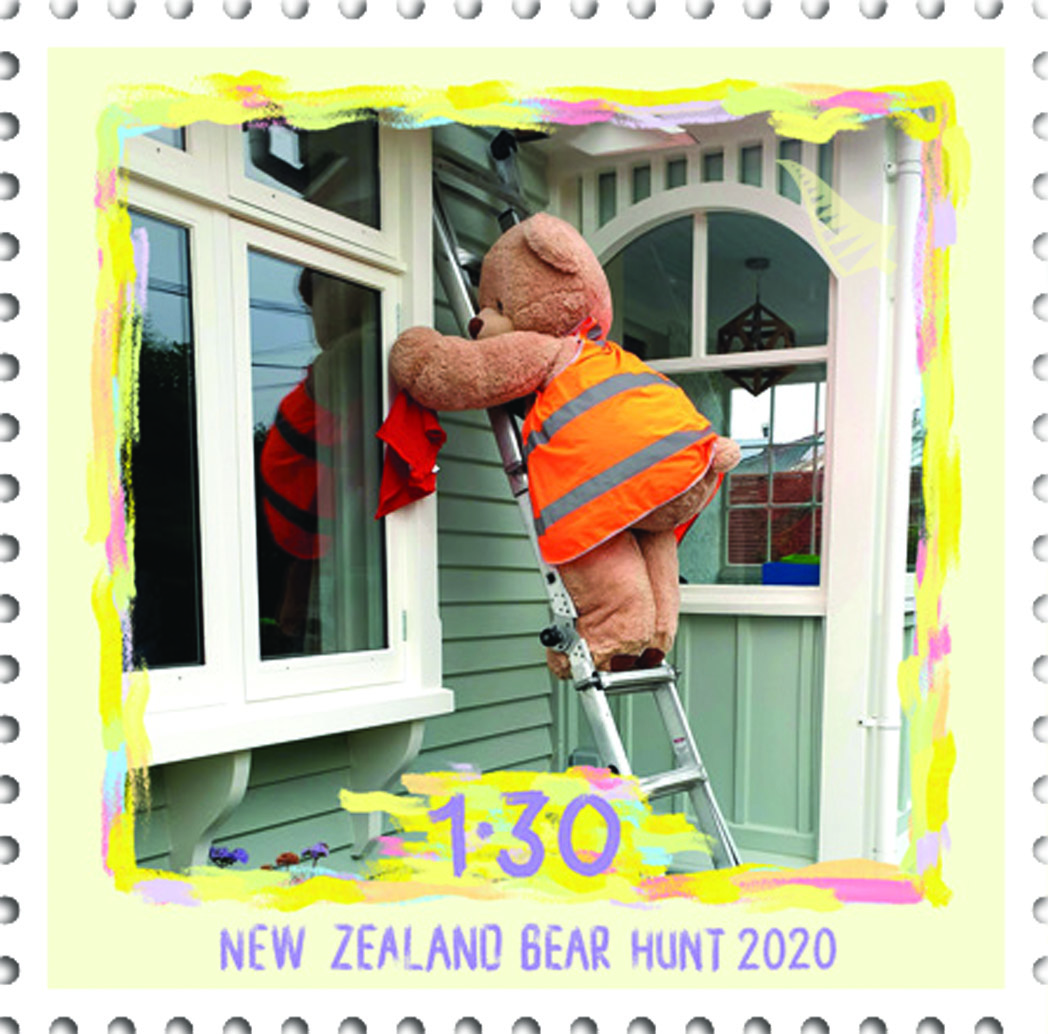 “Theodore Bear and Rudolph [he’s holding the ladder!] have had daily adventures for the local children and my mum has written funny stories for each one that has been shared on local Facebook pages and the Bear Hunt page. It has had such an impact on young and old that mum is now publishing a book with all the photos and stories and is donating the profit to the Foodbank.” 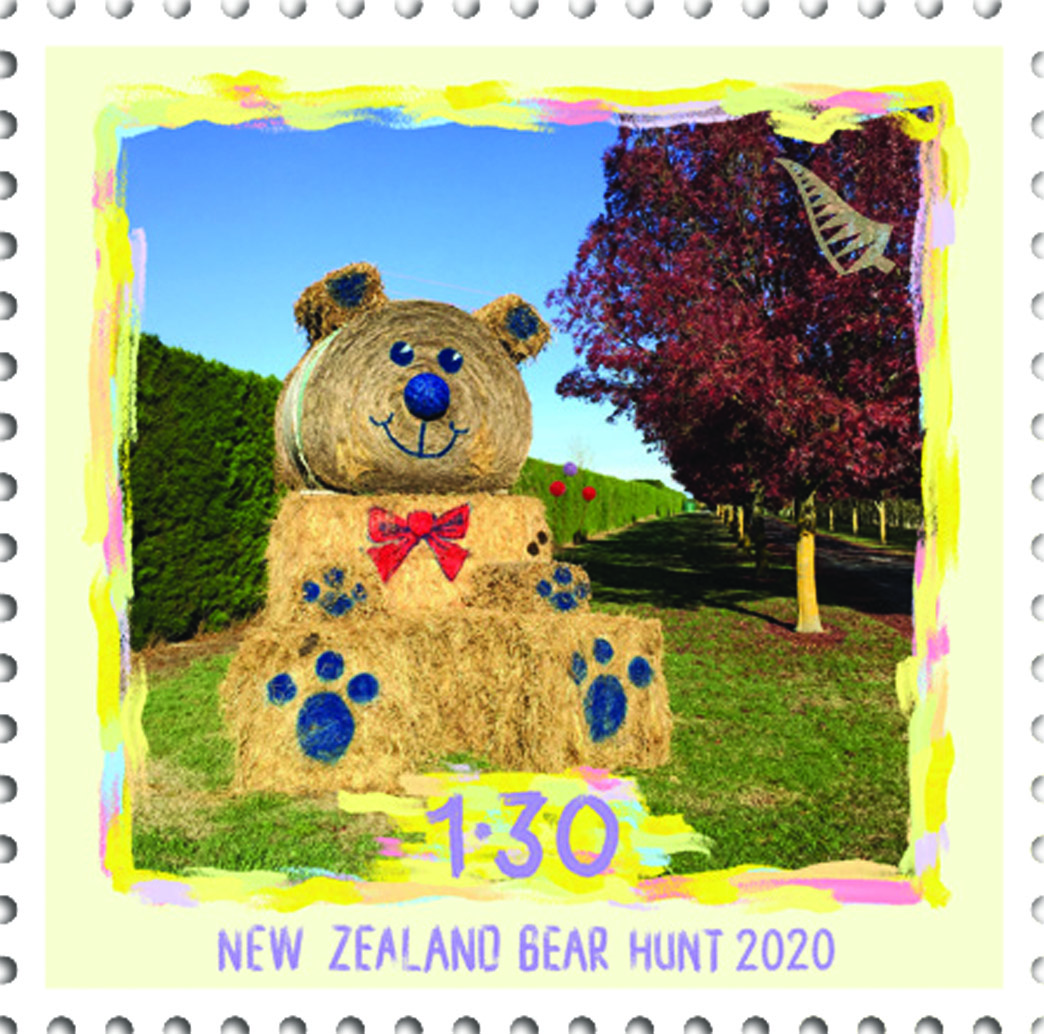 “[This] idea was not completely original... we had seen something similar in rural Victoria in 2018. We heard about and saw lots of teddies in the windows locally and thought it would be nice to contribute something ourselves. We live on a semi-suburban lifestyle block just 2km out of Darfield, and are the only people here with the machinery and the products needed to make Hay Hay Teddy... There are incredible numbers of children and young families who walk or cycle past our gate during lockdown and it has generated a lot of interest locally.” 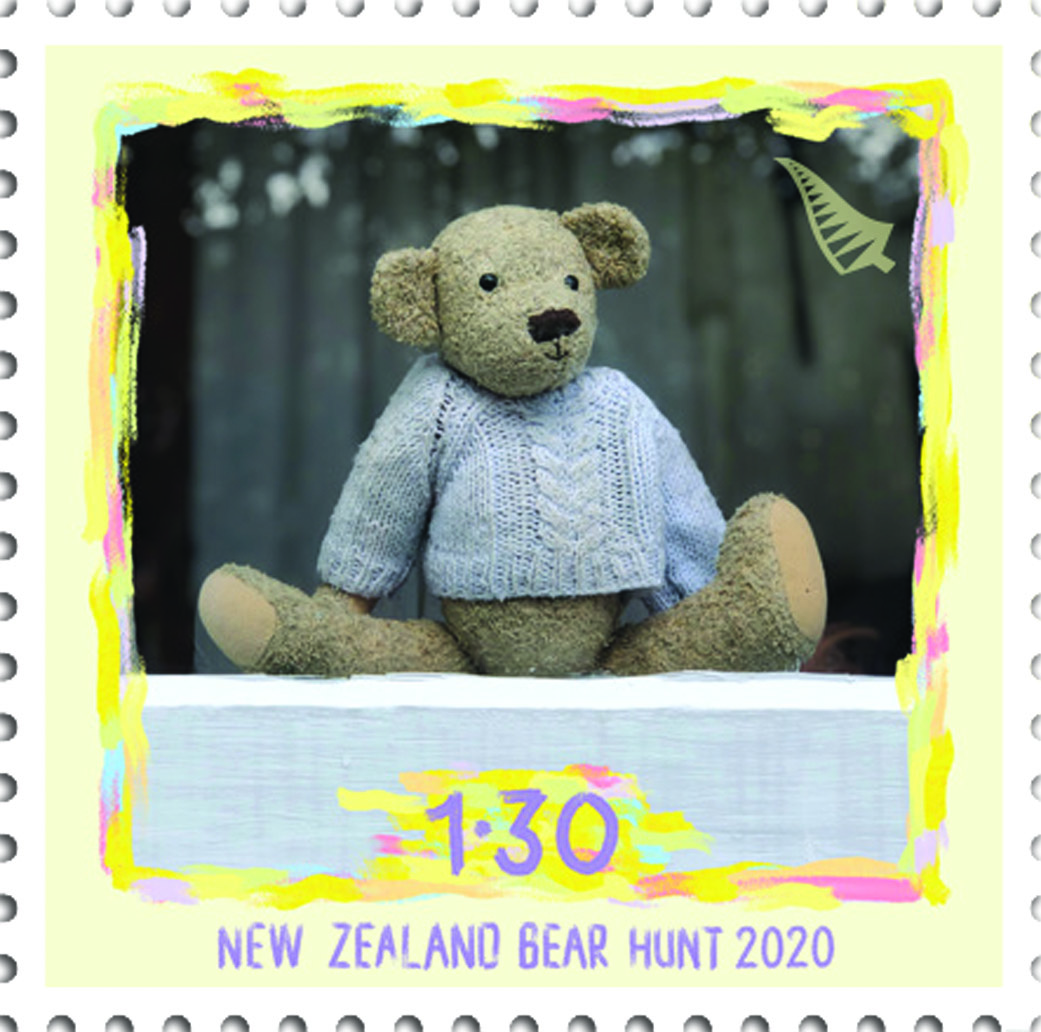 “This is Lubert. He was made especially for me by my Nanna's friend, Mrs Beard. So he is the only one of his type. He came with his very own birth certificate and a blue jersey because everyone guessed I’d be a boy! Mrs Beard passed away a few years [ago], but she made loads of bears for kids in Taupo. Lubert is my most special bear. If there’s an earthquake, I’ll take him because we can’t ever get another Lubert. I think of Lubert as a quiet bear. He likes reading and cuddles. He is a calm bear. I put Lubert in the window to help other kids feel happy during lockdown. We are very proud of him.” 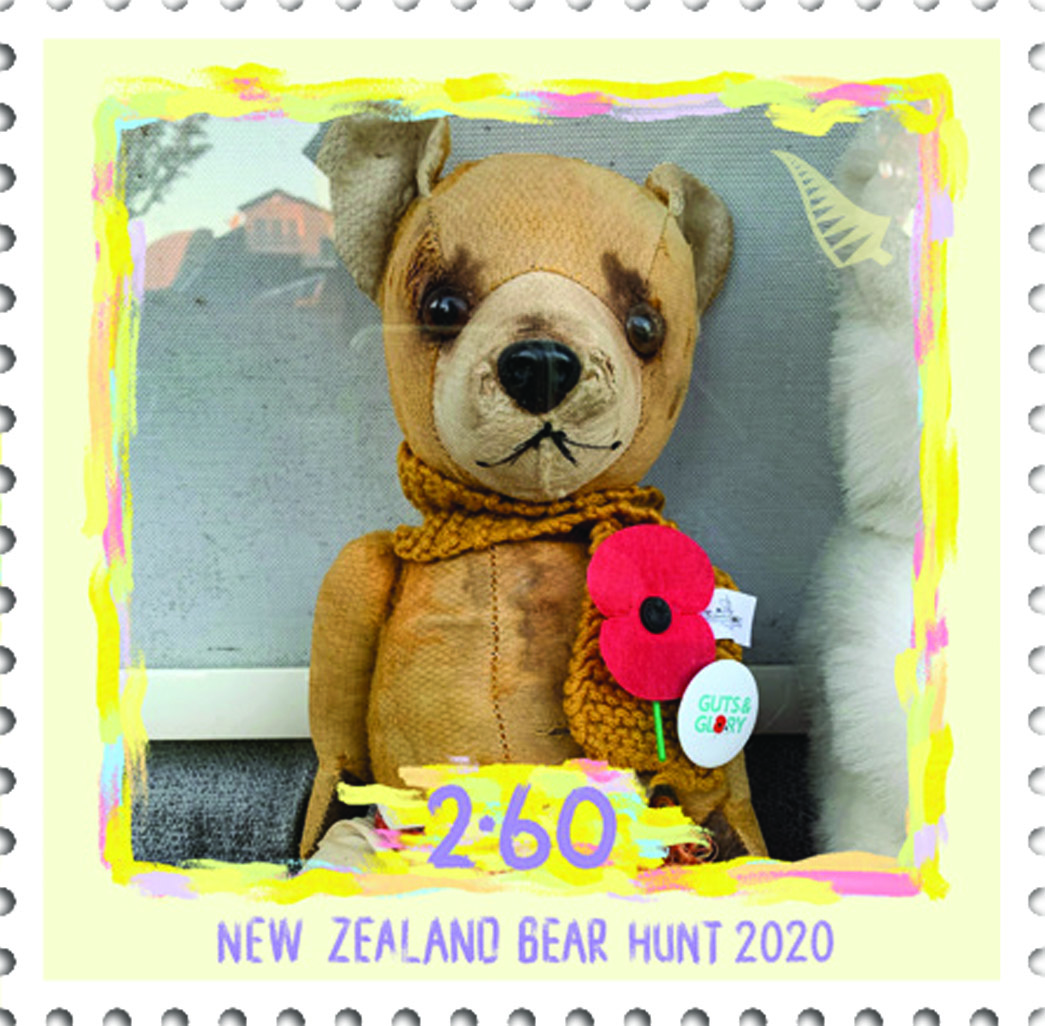 “This is my childhood bear that is 55 years old. I have had it since a little baby. The fur has been well-worn off with cuddles and adventures. I repaired him myself as a child, and for authenticity have not changed that. The trousers I made as a child and he wears the first scarf I knitted as well. He wears his Poppy, and guts and glory pin, for pride and remembrance of my own Anzac Father taken so young due to Agent Orange. My teddy has been everywhere I have been in my life, including Christchurch, Burnham, Terendak Commonwealth Forces Military Camp, Malacca, Malaysia, 75B Chua Chu Kang Rd, Singapore, Waiouru, Auckland, Massey University (I am a veterinarian) and all moves since ... when Dad and family were sent to a new job in a new location the Army “posted” Dad & Family to wherever it was. So fitting the bear has become a stamp!” 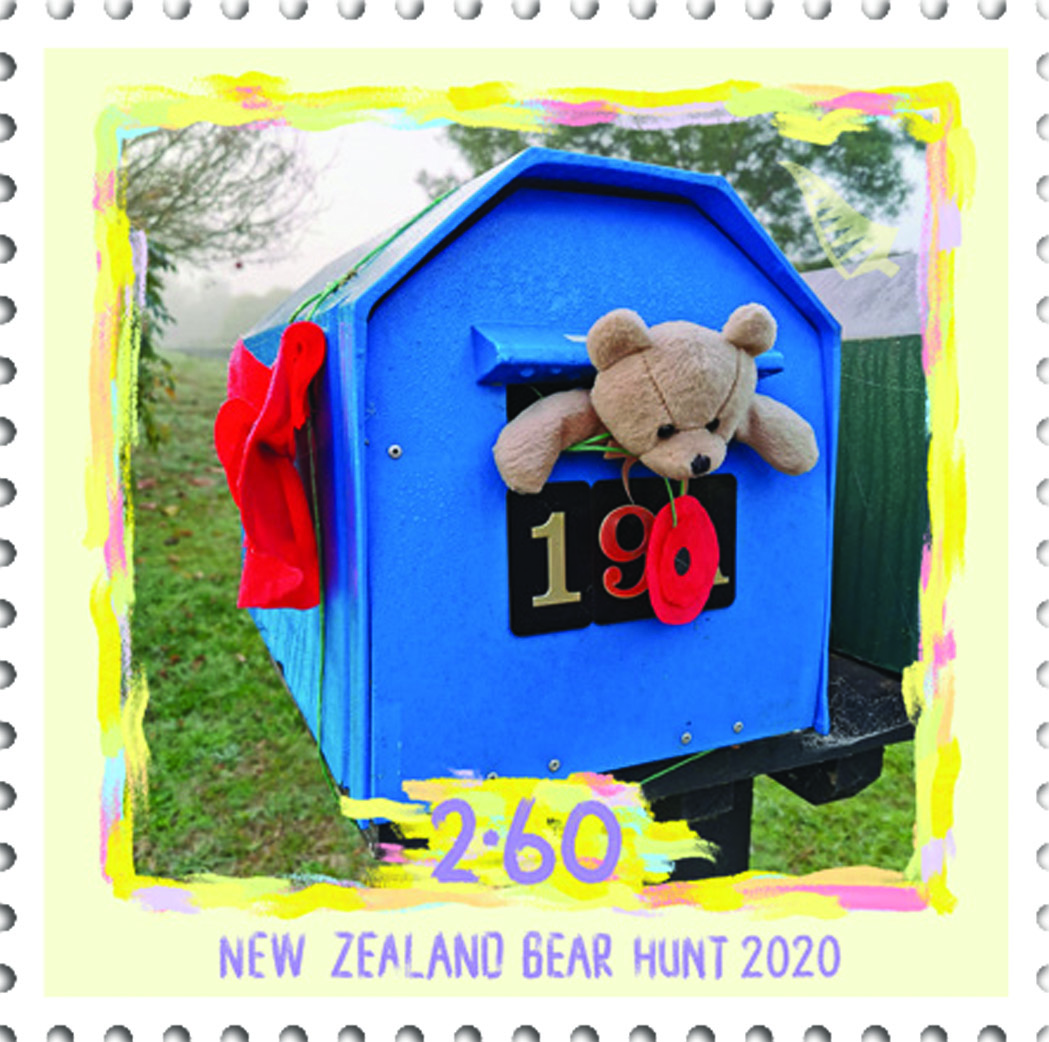 “Little Ted lives in a house that, thanks to his humans James and Oliver, has a fair few teddies and cuddly toys. But come Lockdown, when all the soft toys learnt of the bear hunt, they realised they had a problem. They couldn't see the lane from their house, thanks to a very long drive. What could they do? How could they not somehow be involved in a NZ wide bear hunt? After much discussion it was decided the letterbox would provide a fantastic spot to wave to all the children walking and cycling past as well as providing shelter at night. All the soft toys wanted to be chosen for this very special task, but it was decided that the littlest bear was perfect for the job. His family, Louise, David, James and Oliver are very proud that he will now get to be on a stamp! We have all been keeping busy with lots of baking and online learning. But we still get to see Little Ted on our many, many (did I mention many) walks up and down our lane.” 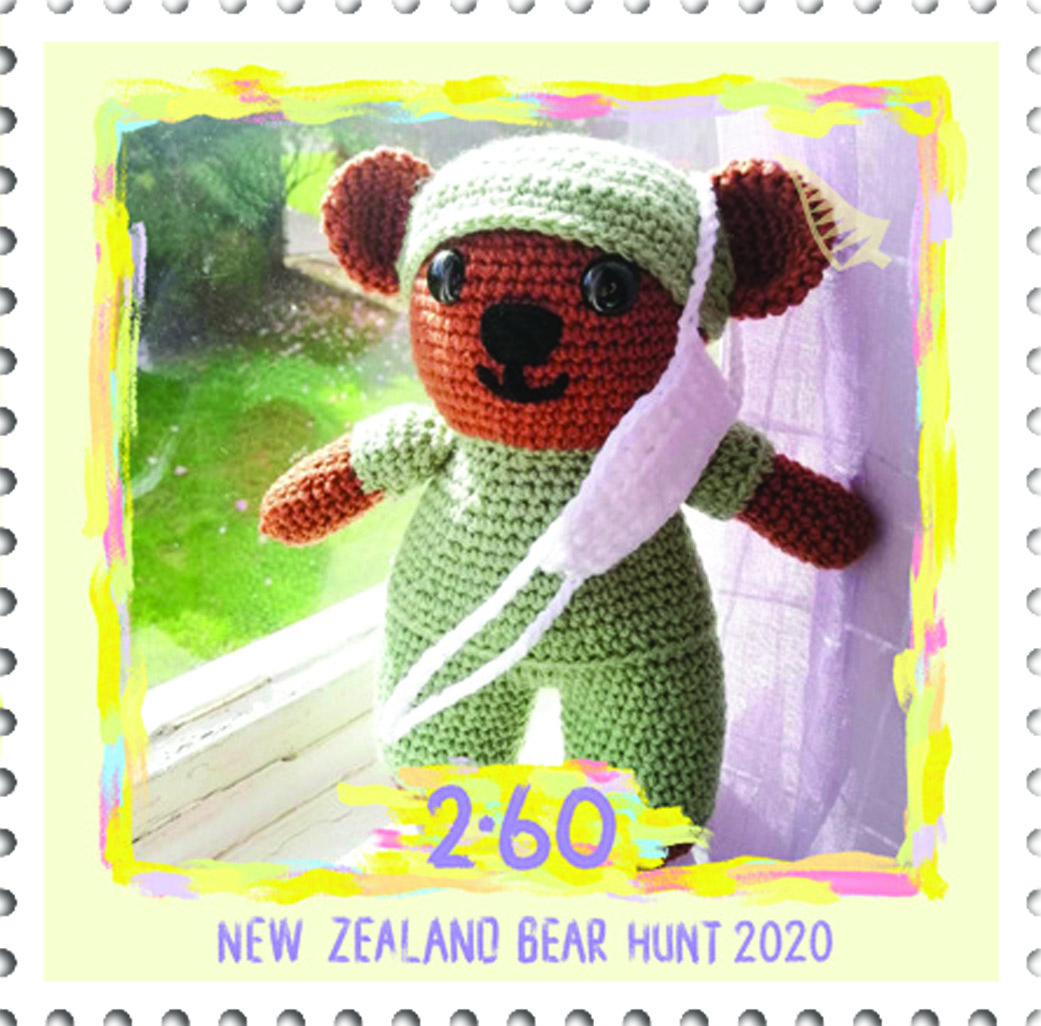 “In this lockdown time I crocheted Frontliner Bear that I put at the window, it is simply to honour the work of our medical workers that working hard at the hospital, hope they still keep their spirit on caring all the patients. The bear is inspired by a crochet designer Aixan Legasto from Yarn It, Darn It who made the pattern of Frontline Hero Bear. This bear is representing and honouring our medical workers that has been working hard for us to be frontliners against Covid-19. When I saw the pattern, I have no doubt to grab yarns and hook to make one for NZ Bear Hunt in my local area. I hope by sharing the sweet and cuteness of this bear can put smiles in everybody who see it in these difficult times.”